The Beck Group recently earned the Georgia Chapter of the International Interior Design Association (IIDA) Best of the Best award for its design-build retail project, The Hub at Peachtree Center.

The Best of the Best Design Awards is the highest honor that IIDA Georgia gives to a design team. The awards recognize design excellence and creativity that continuously push boundaries and exceed expectations. The 2020 awards recognized projects completed from January 1, 2018, to December 31, 2019.

Peachtree Center is a mixed-use development in the heart of Atlanta’s downtown business district. Beck began its renovation project with developer Banyan Street Capital in late 2017.

The goal was to better connect with pedestrian traffic on Peachtree Street, and function as a town square with space for events, a glass-enclosed staircase connecting directly to the retail center, new lighting, reflective pools with seating, and art displayed throughout.

“In line with The Beck Group’s commitment to building communities, we developed a dynamic and flexible environment to draw people together and invite them to linger in The Hub and The Plaza,” said Ryan Horne, Lead Architect and Associate Principal at The Beck Group. 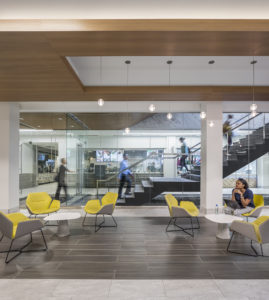 The revamped space is now The Hub, a nod to Peachtree Center’s position at the heart of Downtown, strengthening its role as a vital participant in the revitalization of the city’s downtown core.

The redesigned plaza creates a vibrant civic amenity that engages with the pedestrian activity of Peachtree Street. Beck’s design removes the barriers that impede pedestrian flow and increases usable space with a reimagined public plaza featuring a glass-enclosed stair that connects to The Hub below.

The Hub features a complete upgrade to all finishes and furnishings, improved lighting, and a brighter, airier feel. The entrances to the Retail Center were renovated, including the original Portman “people scoop” entries to the grand glass atrium at the rear of the plaza, which features suspended artwork and generous natural light. 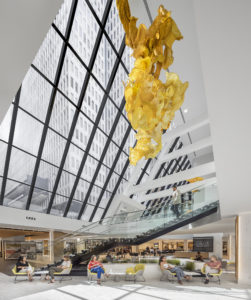 Developed and designed by John Portman in the 1960s, Peachtree Center’s six office towers and adjacent hotel towers, connected by a network of sky bridges, create one of the most distinctive silhouettes on the Atlanta skyline.

Where Vision and Technology Meet

The Transformative Power of Adaptive Reuse

The Hub at Peachtree Center