Black History Month honors African Americans’ triumphs and struggles throughout U.S. history, including the Civil Rights Movement and notable artistic, cultural, and political achievements. One of the ways we are celebrating is by sharing stories from our employees.

In the last installment from our employee perspective series, Project Manager Sean Creque shares the importance of knowing your history and why it’s imperative to speak up in life and our industry.

Tell us about yourself.

My name is Sean Creque, and I am a Project Manager at The Beck Group. I am of Afro-Caribbean descent and was born in Queens, New York, where my mother raised me with my grandmother’s help. My family moved to Long Island when I was in high school. I attended Hampton University an HBCU in Hampton Virginia where I received my Masters degree. 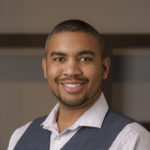 How did you get into architecture?

I graduated in 2009, at the height of the recession, and moved to Texas to pursue a structural engineering degree and pursue career opportunities in DFW. At that time, I did not have a job or family in Texas but came here because it was one of the states least impacted by the recession, and jobs were available.

While pursuing my degree in structural engineering, I started working at Jacobs engineering and eventually EJES, a minority-owned Architecture and Engineering company. At EJES, I worked in the aviation market sector, primarily DFW Terminal B  renovations. After a few years, I moved on to work at Parson Corporation in heavy rail transit on the Silverline Phase II.

In 2015-2016, The Beck Group hosted a career fair at the Fashion Industry Gallery. A few days after connecting with an employee at the fair, I came in for an interview. I have now been with Beck for five and a half years, leading predominantly integrated design and construction projects.

What has been your experience in architecture?

Architecture is a white male-dominated industry. I’ve had one black mentor in my eleven years of experience while I was in Washington DC. African Americans account for only two percent of the profession’s demographic. Working at EJES, I had black colleagues, but at the other companies I’ve worked for, there have been very few that look like me.

There have also been moments where I’ll see others who are afraid to speak up or ask questions. As mentioned before, I was raised mainly by women. My mother was a lawyer and taught me to speak up. She would say, “closed mouths don’t get fed,” and that impacted me. I try to raise my hand, speak up and ask questions whenever possible.

What does Black History Month mean to you?

Black History Month is time to pause and reflect – on all the individuals that came before me and those who opened doors so I could get to where I am and where I strive. I also think about my family and the experiences my mother and grandmother went through. My great-grandfather was a Tuskegee Airmen, and I have family members that were jazz musicians. Their accomplishments are a reminder that anything is possible.

I have a three-year-old son, and now he’s learning about Black History Month. Every week the school presents a different person who made an impact on black history. He doesn’t understand everything since he’s only three, but he sees it. I hope to show him the projects I did when he was a kid and use it to build on with time.

What has knowing your history taught you about yourself?

Black History Month has taught me that I have the opportunity to pay it forward. I recently led college recruiting efforts and we connected with historically Black colleges and universities (HBCUs).

I’m always looking for opportunities to recruit more minorities into architecture and the company. Terry Odis and I went to school together. Once I started with Beck, I referred Terry, and now he’s a Senior Project Coordinator.

I’ve also started looking into ways to increase our minority participation on our design and construction jobs by actively seeking potential partners through my own network. My goal is to bring more African American construction and engineering companies to the table who might otherwise have been overlooked. Half the battle is knowing who is out there.

Black History Month is still relevant especially given today’s cultural climate and social movements like Black Lives Matter. It allows observance of achievements and accomplishments to individuals who have helped shape our culture and the world we live in today, which in many cases go overlooked. Black History Month is just one way to pay tribute to those who came before us.

Getting to Know: Gradlin Franks, Director of Diversity & Inclusion