Francisco has been with The Beck Group for six years. He learned about Beck while attending a career fair while attending The University of Texas at Arlington. As a student, Francisco joined Beck to help create a model for one of Beck’s substantial design projects in Austin. After he graduated from UTA, he joined our team full-time.

Today, the Dallas-based designer and senior project coordinator, is designing the Los Fernandez project in Monterrey, Mexico. He curated this playlist in honor of Hispanic Heritage Month.

Francisco created this playlist in honor of Hispanic Heritage Month. 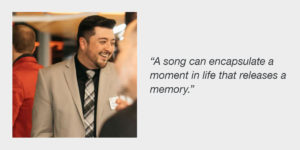 Los Dioses Ocultos by Caifanes: Caifanes is one of the best-known rock bands in Mexico and an artist I have seen the most in concert. Although a bit old, they can still rock out with the best of them. You should know… I always lose my voice when leaving one of their concerts.

Eres by Café Tacvba: This was one of my favorites songs right before moving to the United States and was one of the songs I remember best while in Mexico.

México en la Piel by Luis Miguel: I think this and Natalia Lafourcade’s Hasta La Raiz remind me of how precious Mexico is. This one, in particular, is a more traditional Mexican ballad that includes mariachis! It reminds me of family gatherings and many more good memories, too many to list here!

No Podrás by Cristian Castro: My mom loved Cristian Castro. His songs are upbeat, including this one, and she would put it on while cleaning the house! With such an array of great songs, it was hard to pick just one.

La Calle De Las Sirenas by Kabah: This song reminds me of my older sister. She loved it so much and listened to it over and over and over again. Kabah was one of her favorite Spanish pop singers of all time and consequently mine.