Alejandro is a VDC Manager in our Tampa office. September is a meaningful time for him because he was born in Mexico City in September 1985, days after the devastating earthquake that struck the city.

The earthquake and its aftermath was a difficult time for many, including his mom. At nine months pregnant, she struggled to find a hospital bed to give birth because many hospitals were damaged or destroyed during the earthquake. As fate would have it, Alejandro became an engineer to focus on keeping buildings structurally sound. His career path evolved into the virtual building space, which led him to Beck two years ago.

As a VDC Manager, Alejandro oversees the BIM/VDC policies and procedures are put into practice to innovate work done by our architects, engineering consultants and construction teams. He especially enjoys using technology and implementing Lean construction methodologies on our projects.

Alejandro’s playlist is especially meaningful because it celebrates his Hispanic heritage and spotlights the significant events that impacted his life, family, and Mexicans everywhere. 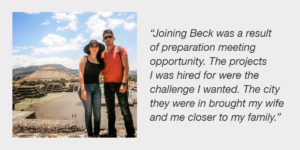 This piece is based on the popular Huapango music of the Gulf region of Mexico; it represents the tropical joy of the area with a subtle finesse worthy of a standing ovation.

Guadalajara by Vicente Fernandez: Mariachi songs are in my blood. My father taught me to sing, and I have many memories of singing with my grandfather, who was from a town by Guadalajara, where Mariachi was born. Influenced by Polkas and Waltzes, Mariachi is an example of innovation and a reminder of how satisfying rural country life can be to us, city folks.

Volver a Comenzar by Café Tacvba: Café Tacuba is one of Mexico’s greatest rock bands whose lyrics speak to courage, persistence, failure, and a thirst for recovery. This song reminds me of the union and the resilience to start again or ‘Volver a Comenzar,’ especially when thinking about Mexico City’s two major earthquakes from September 19, 1985, and thirty-two years later on September 19, 2017. Mexicans showed beautiful gestures of brotherhood to overcome those natural disasters.