Matt Archuletta once dreamed of becoming an astronaut. But the Greeley, Colo., native’s fascination with space turned to more earthly pursuits. That included being the first member of his family to go to college. When Matt enrolled at Colorado State University, he wanted to study business but was uncertain about the type of work he would seek after graduation.

Matt decided on his future career after a relative suggested he take coursework in construction management. Since then, Matt has found that was the best decision because construction has allowed him to “create cool buildings that make Denver a world-renowned city.”

As the project executive at The Beck Group’s Denver office, Matt is leading Beck’s efforts in helping create The Mile High City’s expanding skyline. When he’s not overseeing one of the firm’s construction projects, Matt meets with clients, closes deals, collaborates with colleagues, and other activities that have led to the office’s impressive growth.

Strong demand for the office’s design-build services is being driven by the firm’s expanding reputation regionally and nationally. One of the recent contributors to the office’s growth was landing a $60 million renovation project at Poudre Valley Hospital in Fort Collins. “It was the biggest healthcare project that we’ve won in the Denver market,” he said.

Several years ago, the Denver office added an architectural design practice, and it has played an essential role in its growth. That decision also pleased Matt because he “always liked the idea of rolling up my sleeves and working alongside an architect.”

Besides work, Matt spends his time helping his wife raise their three-year-old and six-month-old boys. “Living the parent life has been super rewarding,” he said. During his free time, Matt takes his eldest son to swimming lessons on the weekends or escapes with his family to Colorado’s stunning landscape for skiing, fishing and other recreational activities.

At Beck, Matt serves as one of the firm’s diversity champions who mentors companies to expand their business. He also helps small and diverse businesses in his community thrive by serving as a board member of the Hispanic Contractors of Colorado. The HCC assists the Denver International Airport, the city and the county on accelerating payments for small businesses. 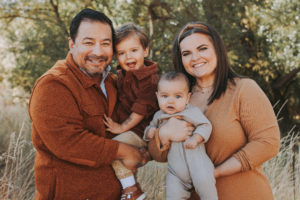