Growing up in Greensboro, NC, Paige Andrews always knew that she would follow in her father’s footsteps in the construction business. “He was always building something for someone. That piqued my interest (in construction) when I was very young,” recalled Paige, a project manager of The Beck Group’s construction practice at the firm’s Atlanta office.

Her career aspiration was later reaffirmed after taking a personality test in high school. The exam revealed that Paige’s personality exhibited certain traits best-suited for a construction career.

While attending North Carolina State University for a degree in construction engineering and management, Paige went to one of the school’s career fairs. She had met one of Beck’s architects recruiting students for the firm. The architect told Paige about the firm’s solid track record in making career opportunities available for women and minorities. That was enough to convince Paige that Beck was her top choice to start her career.

Building Her Career from Atlanta to Charlotte and Back

After graduation in late 2014, Paige joined Beck in Atlanta. She was impressed by the firm’s commitment to diversity and inclusion. “When I got to the Atlanta office, there was so much diversity of its staff. It was fantastic, given that many construction companies are not as diverse.”

Paige credits that to Beck making diversity a priority and having mentors who were also minorities to support and guide her throughout her career.

As for the construction business, Paige says this is the only job she knows of where you can see the fruits of your labor every day. “I love the fact that you can see your progress on projects that you worked on.” 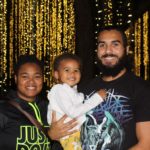 When Paige isn’t working, she spends her free time with her two-year-old daughter. They go to the zoo or museums, hike, take ski trips, or enjoy other outdoor recreational activities. And to help her unwind after a busy day, Paige likes to listen to soul, R&B, pop and different types of music and sit at her piano playing songs.