The milestone was commemorated at a demolition and groundbreaking event hosted by Stream. RiverSouth is the first project delivered as part of Austin’s transformative South Central Waterfront District on the southern side of Lady Bird Lake. 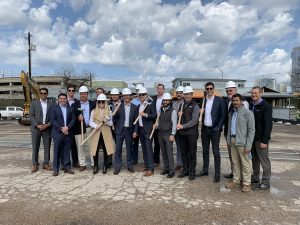 “It is exciting to see our design vision for RiverSouth move one step closer to reality. This project not only ushers in a new era in the South Central Waterfront district but will re-establish a vibrant gateway to downtown,” said Ryan Therrell, director of business development at The Beck Group.

David Blackbird, Stream’s regional managing partner, raised the sign at the event and said, “We’ve assembled a wonderful team, and everyone truly believes in the vision of RiverSouth as a quality development that supports the local community.”

Beck is the architect and contractor for the 15-story, 350,000 SF office building which includes 20,000 SF of ground-level retail and restaurant space, and a below-grade parking garage.

In addition to its panoramic views of downtown, the development will feature an on-site bike valet, sky terrace and a habitable green roof. A state-of-the-art fitness center will occupy a glass box within the green roof, providing fantastic lake and downtown views.

The development is strategically situated adjacent to the South Congress District and popular hike and bike trails.

Plans and design for RiverSouth were revealed in September 2018. Final delivery for the project is planned for 2021.