The Campanile at Old Parkland Tops Out

The Beck Group, the integrated architecture and construction firm, celebrated the topping out of Old Parkland’s newest structure, The Campanile, in Dallas, Texas. In line with the “topping out” tradition, the team placed an evergreen tree at the top of the tower on January 6, 2021.

In a few weeks, the tree will come down and move to its forever home, where it will remain with other well-manicured landscaping in the vicinity. The concrete tower now sits at 186 feet high, but soon a copper dome and ornamental spire will take the structure to its ultimate height of 228 feet.

In addition to the dome and spire, the tower will feature a 15-ton bell named Horatio, which you can see situated in the foreground of the picture below. The Beck team plans to install Horatio at the top of the tower later this month. To learn more about this one-of-a-kind bell, be sure to read this story that D Magazine published about Horatio.

The Campanile is slated for completion in November 2021. It is the sixth building at Old Parkland that Beck has designed and built. We completed the North Campus building and four buildings that are a part of Old Parkland’s West Campus. 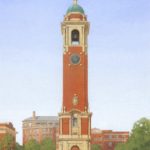 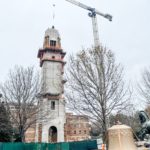 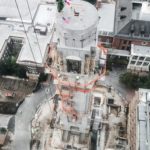 Behind the Gates of Old Parkland